It’s another week of trading and risky assets are rebounding from last week’s massive selloff. Some less hawkish than feared comments from the Fed on an otherwise calm day grab the headlines, although a general sense of optimism about the official start of summer certainly doesn’t hurt matters!

Of course, that summer feeling only applies to the northern hemisphere, and the Australian dollar bulls have apparently gone into hibernation for the southern hemisphere winter, despite today’s price movements. ‘hui. Looking at the AUD / USD chart, rates fell to a new low since the start of the year on Friday, cutting their EMA by 200 days. Whether you think of it as a ‘generic round top’ pattern or a more messy head and shoulders setup, ‘the price action over the past six months reflects the distribution from buyers to sellers and it will be difficult to ascend. over so early. 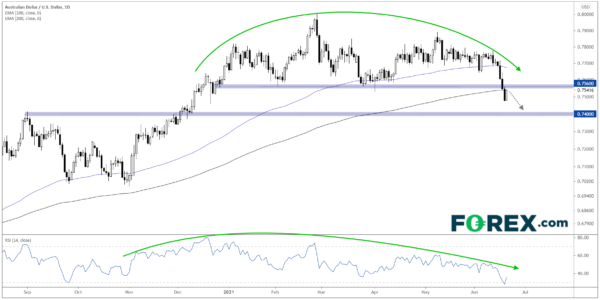 As the chart above shows, AUD / USD has returned to the proverbial “crime scene” – breaking below 0.7560 support. This break-retest pattern is a common setup that allows bears that missed the initial breakout a secondary opportunity to enter short positions as long as rates stay below 0.7560. On the downside, the next logical level of support to watch will be the previous resistance turned to support near 0.7400.

With a lackluster Australian retail sales report (0.1% m / m growth vs. 0.4% expected) already behind us, here are the other economic releases AUD / USD traders should watch for this week: