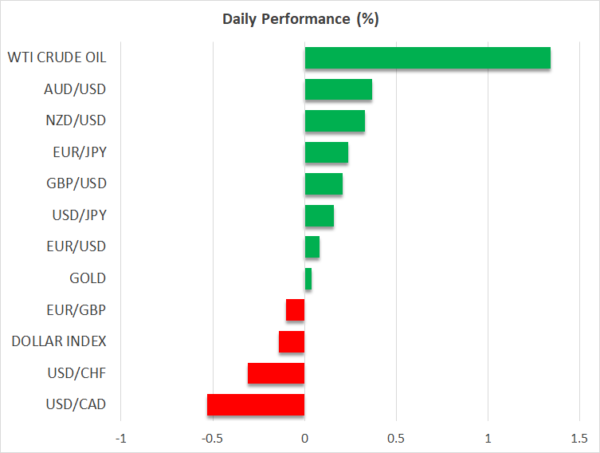 Stocks bounce back from Evergrande’s panic

Global stocks were more stable on Tuesday, recouping some of the losses of the previous days, as fears of a huge spillover from the Evergrande debt crisis eased somewhat. As investors increasingly compare the Evergrande crisis to the Lehman Brothers collapse in 2008, they remain in the dark about the Chinese government’s intentions on whether or not to save the world’s most indebted real estate developer.

The secrecy behind a possible state bailout to prevent the collapse of China’s largest real estate company will likely keep markets nervous over the next few days when two interest payments are due on its bonds. The first payment comes on Thursday, which, if Evergrande defaults, could quickly escalate the fallout, potentially triggering an even stronger selloff than seen in recent sessions.

While some traders do not anticipate widespread global contagion in the event of a default, the risk of a domino effect in China’s struggling real estate sector is uncomfortably high and it is not clear to what extent the authorities would be able. to contain a major explosion.

For now, the mood has calmed down a bit, with plenty of other events for investors to focus their attention on. The Hang Seng Index turned positive to close 0.5% higher after falling to a new year-old low earlier today. US equity futures also rebounded and were last trading around 1.5% higher. The S&P 500 closed near a two-month low on Monday, but its woes may not be over as the Fed begins a two-day monetary policy meeting today to discuss the timing of the withdrawal of stimulus measures .

The dollar pulls back slightly, the loonie jumps on election results

While policymakers are unlikely to come to a step-down decision this week, they will likely signal that an announcement should be expected at the next meeting in November. However, investors are probably more concerned with the timing of the first post-pandemic rate hike. The Fed is due to release its updated dot chart tomorrow and if FOMC members predict a rate hike in 2022, it could raise Treasury yields and the US dollar slightly.

The dollar index is slightly lower today amid somewhat improved risk appetite. The yen is also generally weaker, with risk-sensitive commodity dollars among the best performers, led by the loonie.

The Canadian dollar is up more than 0.5% against its US counterpart, boosted by election results in Canada which are seen as maintaining the status quo. The ruling Liberal party won the most seats in yesterday’s federal vote, securing Prime Minister Justin Trudeau a third term in government. Although Trudaeu once again failed to secure the majority he wanted, he should still be able to lead a minority government, keeping his party’s spending promises intact and eliminating immediate downside risks. for the loonie of a more prudent fiscal administration.

The Australian and New Zealand dollars were also attempting a decent rebound on Tuesday as the mood improved.

The kiwi has withstood some selling pressure after RBNZ deputy governor Christian Hawkesby downplayed the possibility of a 50 basis point rate hike at the October meeting. The RBA, meanwhile, reiterated its dovish stance in the minutes of its September political meeting, appearing more worried about a slower recovery of the Delta variant. But overall, the minutes were nothing new and the Aussie is up 0.3% today.

The pound also climbed, albeit more modestly, amid growing concerns about the impact on the UK economy of a looming energy crisis in the country. The UK’s over-reliance on natural gas for electricity has left energy companies highly exposed to the recent price spikes and may need government help to stay afloat.