Ultimately, I have no interest in buying this market, at least not until the ECB changes its attitude, or something fundamental does.

The German index broke significantly lower in Thursday’s trading session as we broke through the €13,000 level. Ultimately, it’s a market that I think will continue to experience negative pressure, primarily due to the fact that the German economy has less than stellar economic numbers, and of course the fact that there’s a major global slowdown in the sights of traders right now.

The reason this is so important is that the DAX has a number of big exporters in the index, so it has a major influence on whether or not German companies will make money. As corporate earnings continue to be depreciated soon, it is more likely than not that they will only add more negative pressure on the DAX. All things being equal, risk appetite is almost non-existent at this point, so it makes sense that equity indices continue to struggle. Any rally at this point should be viewed as a possible “bear market rally” from time to time. I wouldn’t watch it as much again, at least not until the ECB gets involved.

Speaking of the ECB, they recently hinted that they were going to get a little more hawkish, but then they had a private meeting to discuss bond yields in Italy. In other words, they may have to turn things around because the German economy is struggling, as is the rest of the European Union. After all, there is a serious lack of energy as natural gas from Russia continues to flow.

That being said, and the lack of economic growth, it is very difficult to see the DAX take off in this environment. I think given enough time, we will see sellers on rallies, especially near the €13,500 level, assuming we even get such a big bounce. I think the market is more likely than not to see a lot of selling pressure, and maybe even an attempt to come down to the €12,500 level. If we can break below the €12,500 level, it could open a €2,000 decline based on the large “M pattern” we have seen. Ultimately, I have no interest in buying this market, at least not until the ECB changes its attitude, or something fundamental does. 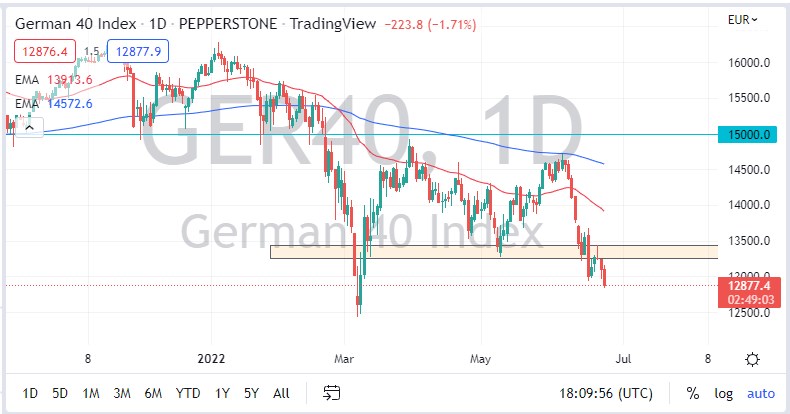