The EURJPY is testing the 20-period Simple Moving Average (SMA) again, after entering the neckline of the double-bottom pattern higher. Price is losing some momentum, staying below the resistance level of 133.50 and inside the Bollinger Bands.

As for the technical indicators, the RSI falls into the positive zone, while the MACD dips below its trigger line, suggesting a downward movement on price action before rising again. However, the 20-day SMA broke through the 40- and 200-day SMAs to the upside in previous sessions, highlighting the recent bullish phase.

If the market extends losses, support could be reached between the 131.20 support level and the 40 and 200 day SMAs in the 138.50-138.30 region. A significant leg below this area could send prices towards the 130.05 barrier, which is currently fluctuating near the lower Bollinger Band at 129.75.

On the flip side, if the pair rebounds, immediate resistance could be encountered at the 133.50 level ahead of the upper Bollinger Band at 133.90 and the over three year high of 134.11.

Overall the pair is bullish as long as it holds above the 200 day MA. If this line is violated, the bears could gain the upper hand. 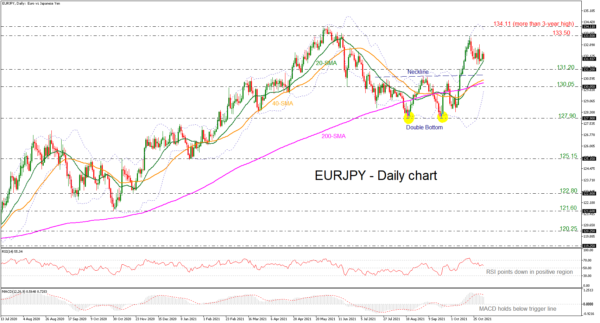