After the news of stronger-than-expected US inflation figures, the price of an ounce of gold fell to the level of $ 1,798.

The price of gold has returned to the upward correction path and has stabilized around the resistance level of $ 1,815 per ounce at the time of writing. Investors have reacted strongly to data showing accelerating consumer price inflation in the United States and to comments from a Federal Reserve official. Investors are also monitoring news of the spread of the delta-type coronavirus and the possible return of new lockdown measures in many countries.

On the monetary policy front, New York Federal Reserve Chairman John Williams said the US economy had not made substantial progress for the Fed to start cutting back on asset purchases. For his part, St. Louis Fed Chairman James Bullard said in an interview with the Wall Street Journal that the US central bank should start cutting stimulus measures, but added that it should start immediately.

Investors have also reacted to comments from San Francisco Fed Chairman Mary Daly that the large gains in the US CPI are just temporary “pop” inflation that will not last, and the Fed must stay. “Stable in the boat” with its accommodating stance on monetary policy.

Federal Reserve Chairman Jerome Powell is due to testify on the semi-annual monetary policy report to the House Financial Services Committee on Wednesday and to the Senate Banking Committee on Thursday. Confirmatory indications of an imminent bank policy tightening will support the strength of the US dollar, which will be negative for the price of gold.

Los Angeles County reports the fifth consecutive day of more than 1,000 cases of the novel coronavirus. Health officials have warned that the delta-type virus is the most contagious and continues to spread rapidly among unvaccinated people in the state. Los Angeles County is home to a quarter of California’s 40 million people. County officials have reported 1,103 new cases in the past 24 hours. County officials said the five-day average for cases is 1,095 – a jump of more than 500% in just one month.

Meanwhile, the state has reported 3,256 confirmed cases of the novel coronavirus – the highest one-day total since early March.

Officials in Sydney have said Australia’s largest city will remain closed for at least five weeks due to the continued spread of the Corona virus. New South Wales Premier Gladys Berejiklian said on Wednesday Sydney’s 5 million residents would remain confined until at least July 30, two more weeks than expected.

According to Gold Technical Analysis: On the daily time horizon chart, the price stability per ounce of gold is still above the psychological resistance at $ 1,800. This motivates the bulls of the yellow metal to activate more buy trades, and hence the rush to higher resistance levels and the closest to them are currently $ 1821, $ 1837, and $ 1855. These are important levels for the next strong move, the psychological high of $ 1,900 an ounce. On the other hand, bullish hopes evaporate if the price of gold drops below the support level of $ 1,770 per ounce. So far, I still prefer to buy gold at all bearish levels. Global fears of a rapid spread of the Corona Delta variable, as well as further skirmishes between the United States of America and China, will support gold as a safe haven. 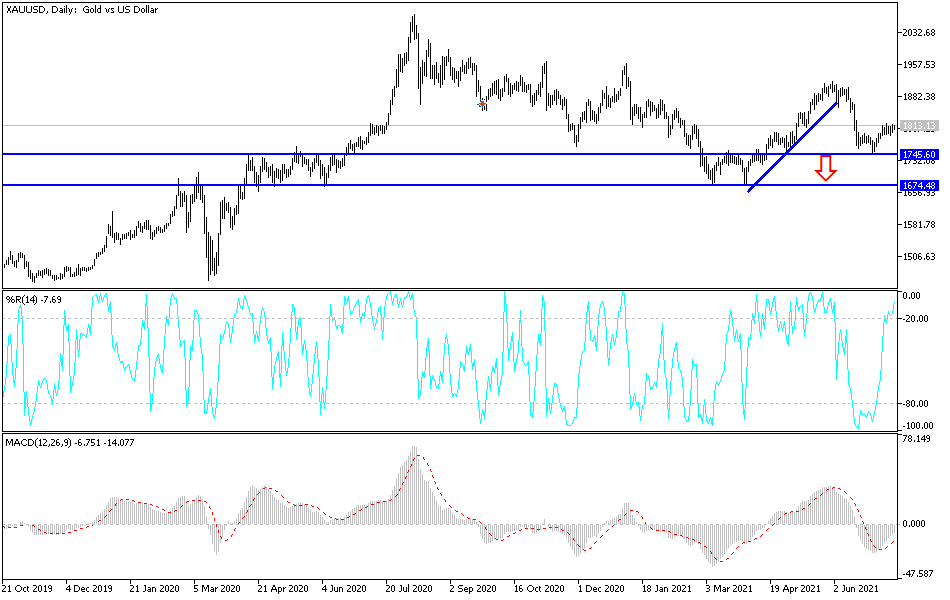