After a surprise lockdown prevented policymakers from raising interest rates in August, the Reserve Bank of New Zealand (RBNZ) is widely expected to make the move at 02:00 GMT on Wednesday. However, the risks surrounding the kiwi appear to be on the downside as markets have almost fully integrated three rate hikes over the next three meetings, leaving room for disappointment. Overall, Chinese risks also entered the equation.

When the RBNZ put its rate hike plans on hold in August, it made it clear that it was just a delay. Since then, incoming data has shown the economy to be incredibly strong before the closures and has remained fairly resilient throughout this ordeal.

Consumption has naturally suffered and the number of people receiving unemployment benefits has increased in recent times, but the impact has been much smaller compared to the first foreclosure last year. Meanwhile, various business and household surveys have been fairly stable, suggesting that most economic players are considering closures and towards a full reopening through vaccination. Indeed, many restrictions have already been lifted. 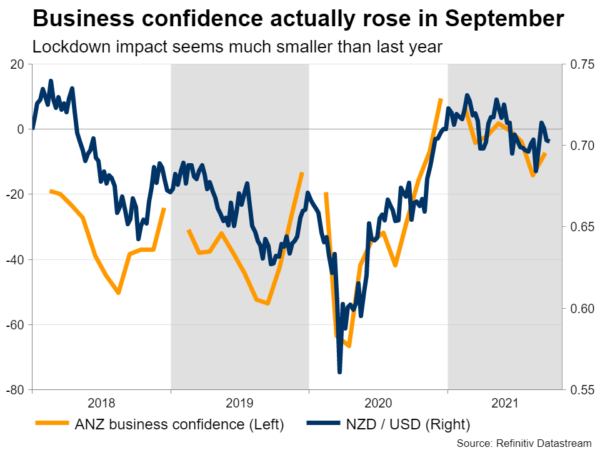 There will always be damage from a lockdown – it’s inevitable. The question is how much, and in the case of New Zealand, that doesn’t sound like a big deal. Inflationary pressures are still intense, the economy was practically at full employment before this shutdown and the housing market is so hot the Reserve Bank can no longer ignore it.

Therefore, the markets are confident that the RBNZ will hike rates next week, taking into account a 90% probability for such action. Another rate hike is almost fully taken into account for November, followed by another in February. This is really aggressive pricing – it implies that the central bank will hike rates at each of its next three meetings without fail.

It’s very possible, but it’s already built into the market, so there’s room for disappointment. In other words, the risk / return profile of the kiwifruit does not seem very attractive here.

If the RBNZ raises its rates and says it will do it again soon, that’s already factored in, so any kiwi boost could be minor. On the other hand, if the RBNZ hikes rates and does not engage in an immediate follow-up move in November, or if something happens in the meantime that does not allow this to happen, the currency could suffer because short-term yields decline. 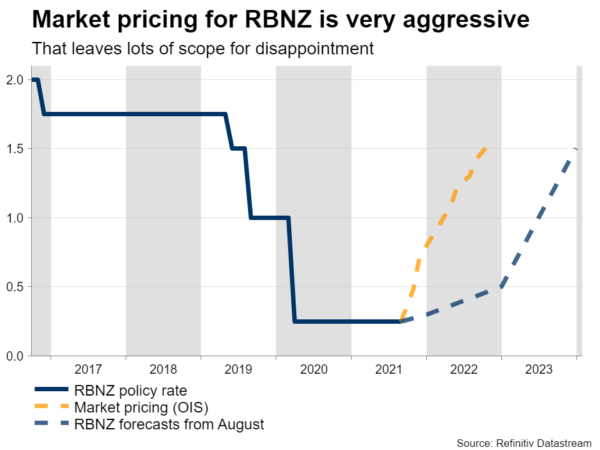 This is a classic example of a central bank priced for perfection, meaning the risks surrounding the kiwi are likely asymmetric and on the downside.

Looking back, the picture for the kiwi seems neutral at this point. On the bright side, the domestic economy looks likely to rebound strongly after the closures, commodity prices are high, and rising interest rate differentials are likely to support the currency over time, especially against weak countries. yield like the euro and the yen.

That said, the kiwi will also face growing risks around China, which is by far the country’s largest trading partner. There are essentially two crises happening at the same time, with painful deleveraging in the real estate sector compounded by widespread blackouts that have hit heavy industry.

The end result could be a marked slowdown in Chinese economic growth as these issues resolve themselves, inevitably hitting New Zealand through the export channel. A potential change in that direction would be if Chinese authorities really started pulling on the stimulus levers, but until then it’s somewhat difficult to be bullish on the kiwi.

If one looks technically at the kiwi / dollar, initial support for further declines can be found around the 0.6800 handle, a violation of which would turn attention to 0.6725.

On the upside, the first major target for the bulls could be the crossroads of the 0.7095 area and the downslope from the February highs.