The Swiss National Bank will close its meeting on Thursday at 07:30 GMT. He will most likely keep rates globally low and stress that he will continue to intervene in the foreign exchange market as the franc has started to gain ground. Looking ahead, however, it is difficult to be positive on the franc in an environment where foreign central banks are starting to withdraw liquidity but not the SNB.

The Swiss economy has escaped deflation lately, but don’t expect bullish signals from the central bank this week. The improvement has been minor so far and, more importantly, any positive remarks could fuel increased demand for the franc, which the SNB is desperate to avoid.

A stronger exchange rate makes exports less competitive abroad and lowers the prices of imported products, dampening both economic growth and inflationary pressures. As such, the SNB has actively intervened in the foreign exchange market for years to weaken the franc, which it considers ” much appreciated “.

The Bank stopped intervening in the first quarter of the year, with the franc losing ground on its own thanks to the rise in yields on foreign bonds. However, the second quarter saw the franc regain some strength, forcing the SNB to resume its interventions. 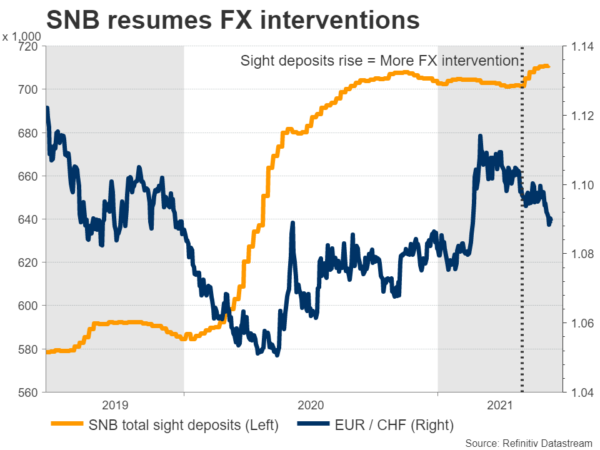 This meeting will probably go off without incident. The Bank will probably stress that it has no intention of exiting negative rates or stopping foreign exchange intervention. Several SNB officials have said this recently and if they simply repeat this old message, any reaction from the market is unlikely.

Overall, the dominant theme over the next few years will be which central banks will raise interest rates first to keep inflation under control. The SNB could be the last to do so. The other competitor is the Bank of Japan. Both are economies with chronic deflation problems.

This is bad news for the franc. In an environment where foreign interest rates rise but Swiss rates do not, the franc would become even less attractive.

The SNB will be delighted. Waiting longer than everyone else to normalize monetary policy would kill two birds with one stone – it would minimize downside risks to the economy and demolish the franc. 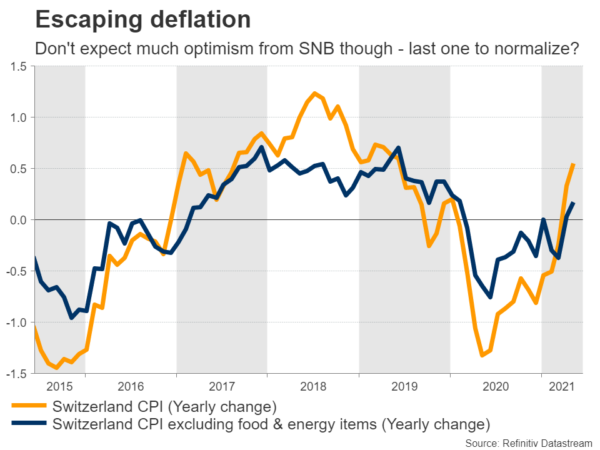 In this regard, it is almost impossible to be bullish on the franc. Not only could this suffer due to widening credit spreads, but the safe haven demand for the currency could also fade as the global recovery accelerates. And if that wasn’t enough, the bulls will also have to fight the SNB every step of the way.

What could revive the franc?

The main risk from this point of view would be an economic or political shock that hits global markets and triggers panic, sending investors into defensive assets. Perhaps a very vaccine-resistant monster covid mutation or a geopolitical “accident” in the South China Sea or the Middle East.

This would probably give life to the franc. That said, the persistence of a force is another story, as the SNB would start to intervene over time. In other words, the longer-term trajectory for the Swiss currency looks negative, but the journey is unlikely to be in a straight line.

From a technical standpoint on the Euro / Franc, if buyers regain control and manage to break through the 1.0930 area, the next hurdle could be the last higher near 1.1000.

On the downside, initial support for further declines can be found as low as 1.0870, a violation of which would turn attention to the February high of 1.0845.