The Swiss manufacturing sector continues to show strong growth. The June manufacturing PMI stood at 66.7, well above the expansion / contraction threshold of 50 points. The reading was lower than the previous release of 69.9 and the estimate of 69.7, but at these high levels of expansion investors are unlikely to focus on a small slowdown. With the improvement of the global economy, the Swiss manufacturing sector is expected to continue to show strong growth in the second half of 2021.

The Swiss franc is falling, which is sweet music to policymakers at the Swiss National Bank (SNB). In order to maintain the competitiveness of Swiss exports on world markets, the SNB intervenes in currency markets to dampen the value of the franc. The SNB sold some 110 billion francs in 2020, but has massively reduced those purchases this year, selling only 296 million francs in the first quarter. The devastating economic downturn caused by Covid in 2020 has prompted nervous investors to flock to safe-haven assets like the franc. Now that the major economies are showing steady improvement, risk sentiment has rebounded and demand for the franc has plummeted.

The U.S. non-farm payroll is in sight

Markets focus on the June US jobs report. Non-farm payrolls are expected to reach 700,000, up from 559,000 in May. Still, investors remain cautious as NFP has underperformed in the last two releases.

Investors will also be keeping a close watch on wage growth in the United States. The estimate for June year-on-year is a significant gain of 3.7%, compared to the May reading of just 2.0%. With many jobs vacant, employers have raised wages in hopes of attracting workers to fill the jobs. If wages rise sharply, we could see the upcoming inflation numbers rise as well, which will certainly grab the attention of the Federal Reserve. 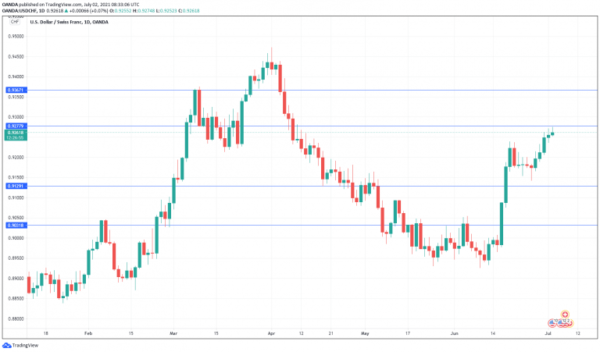