President Joe Biden gave an upbeat speech on Tuesday, saying America is “stronger today than it was a year ago” even as war rages in Eastern Europe and that concerns about inflation persist at the national level. The letter came after the United States announced that it would close American airspace to all Russian flights, a point mentioned by Biden in his speech saying that “further isolates Russia and increases the pressure on its economy” .

The president also said that Russian President Vladimir Putin’s unprovoked attack on Ukraine “will make Russia weaker and the rest of the world stronger”.

Biden outlined a plan to reduce inflation by boosting domestic manufacturing and highlighted Corona virus treatments and vaccines, despite fears of new mutations.

Meanwhile, Russia stepped up its bombardment of Ukraine’s second-largest city, Kharkiv, on Tuesday. No tangible progress has been made in ceasefire talks between Russia and Ukraine held near the Ukraine-Belarus border on Monday, although the two sides agreed to continue the talks.

On the economic data front, the Institute for Supply Management said its manufacturing index rose to 58.6% in February from a 14-month low of 57.6% the previous month. Economists polled by The Wall Street Journal expected the index to rise to 58%. Any figure above 50% indicates growth.

Technically, the index pulled back after retesting the main resistance level of 34,000 as we predicted in our previous reports. This is with its impact in breaking a minor uptrend line earlier, as seen in the attached chart for one period (daily), while the index suffers from continued negative pressure. This is due to the fact that it is trading below the simple moving average of the last 50 days.

The decline in the index came despite the start of positive signals on relative strength indicators, after they reached oversold areas, in an attempt to drain some of that oversold, which could limit losses for the index. hint in the future.

Therefore, we expect the index to drop further in its next trade, especially if it breaks the current support at 33,271.93, to target the support level at 32,071.40. 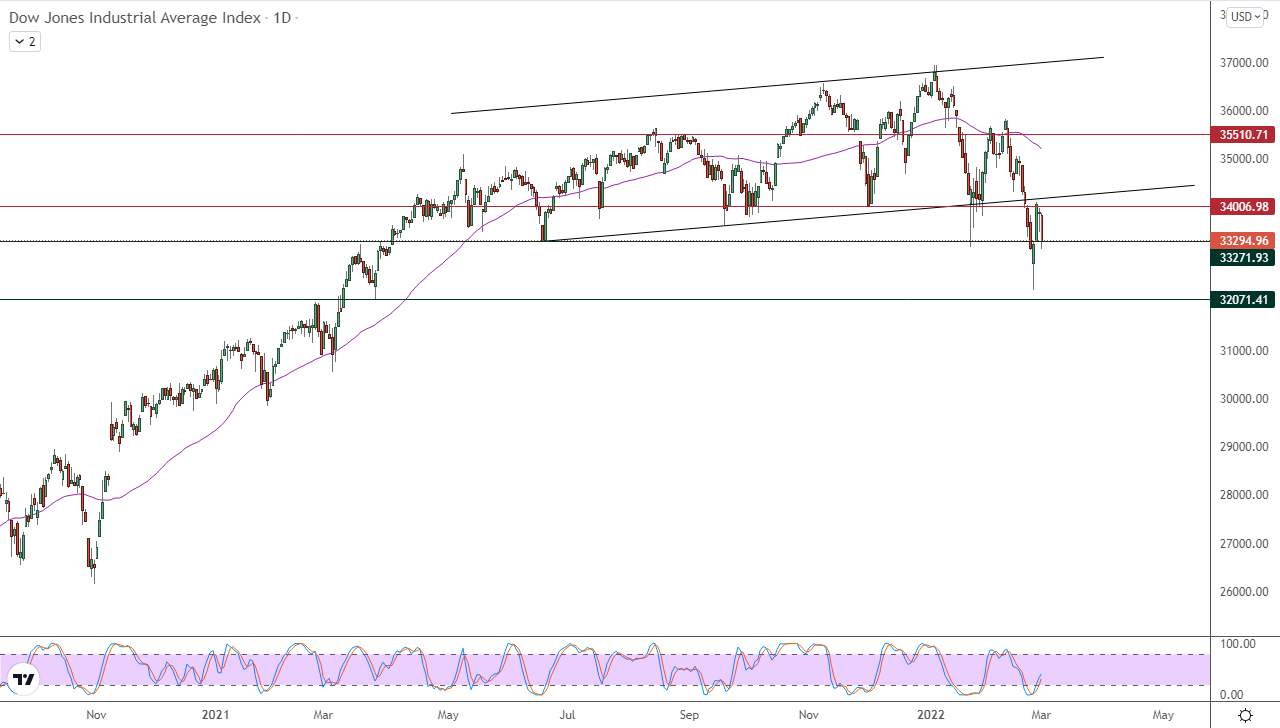