U.S. Reserve Bank Governor Jerome Powell reiterated his bank’s intention to increase the pace of U.S. interest rate increases at any rate in order to control the bank’s target on US inflation. It has reached its highest level in 40 years and is expected to rise. What Powell mentioned is a confirmation of what he mentioned earlier, and as a result, the price of the EUR/USD currency pair remained steady in its recent trading range. The euro dollar price is now around the 1.0582 level, and yesterday it jumped to the highest resistance of 1.0605 for the currency pair since trading began this week.

Eurozone consumer confidence is approaching its lowest level since the early months of the pandemic as high inflation weighs on purchasing power and households fear the ripple effects of Russia’s war in Ukraine. As a result, a monthly gauge from the European Commission showed a confidence reading of -23.6 in June from 21.1 in May and worse than a reading of -20.5, the median estimate from a Bloomberg survey. to economists.

It was below a historic low in April 2020 as Covid-19 swept across the continent.

The war on the borders of the currency bloc and the renewed pressure on global supply chains have severely affected the euro zone. As a result, economic growth is expected to slow later this year – with some banks warning of a possible recession, while inflation has accelerated to more than four times the European Central Bank’s 2% target. Consumer spending has held up so far as unnecessary vacations after two years of coronavirus shutdowns offset cuts elsewhere. However, it is doubtful that the momentum can continue, especially as the European Central Bank prepares to raise interest rates for the first time in more than a decade.

There is no change in my technical view of the price performance of the EUR/USD currency pair. The overall trend is still closest to a continuation of the downside, especially if the bears move in price below the 1.0500 support level. I still see the stark contrast between the future of interest rate hikes by the European Central Bank and the US Federal Reserve Bank, as well as the continuation of the Russian-Ukrainian war, as factors affecting negatively any gain made by the euro-dollar pair in the coming days.

The closest targets for the bulls are currently 1.0635, 1.0700 and 1.0785, respectively. The euro dollar will be hurt today by the announcement of the manufacturing and services PMI readings for the eurozone economies. In the United States, the same data, as well as the number of weekly unemployment insurance claims and current account figures, as well as the second testimony of the governor of the American Federal Reserve, Jerome Powell. 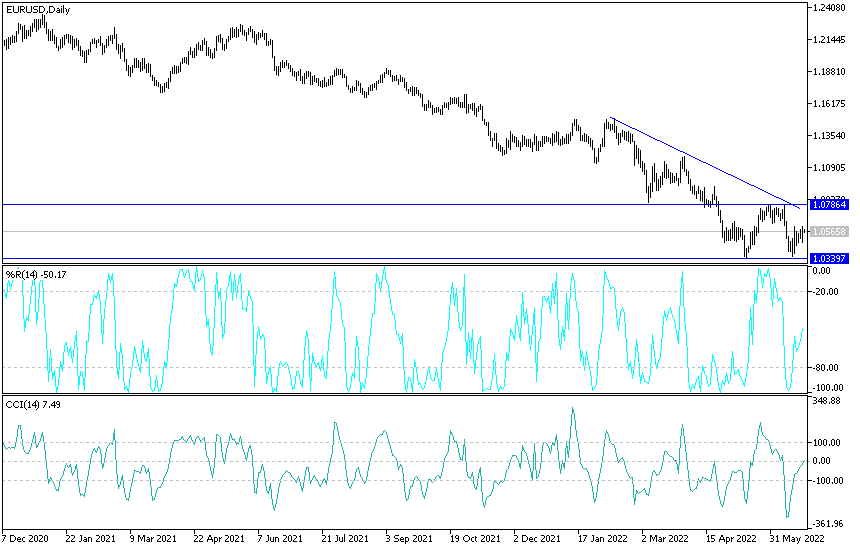